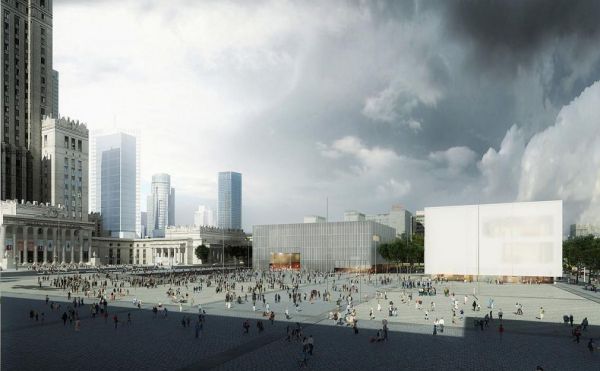 POLAND The Museum of Modern Art (MSN) in Warsaw has launched a limited tender to choose the general contractor to build the home of the institution on a plot on the north side of pl, Defilad in the city centre.

The building permit for the project came into force in Q1, opening the way for the investment process. The contractor selected is to build a museum building (excluding a theatre building) with a total area of ​​almost 20,000 sqm, which has been designed by the Thomas Phifer and Partners architectural studio of New York in partnership with Polish studio APA Wojciechowski. The new building will comprise 4,000 sqm of exhibition rooms, educational rooms, a library, an auditorium, a cinema, a cafeteria and the reconstruction of a late-1950s building – the Experimental Studio of Polish Radio. The tender is expected to be decided in October 2018 with the anticipated date of the opening the museum falling in December 2021. Construction costs are estimated at PLN 208.1 mln (VAT excluded). The deadline for submitting bids has been set for April 26th, 2018.

“We have received the permit for the construction of the Museum of Modern Art, so the details of the tender for the project can now be revealed,” stated Warsaw mayor Hanna Gronkiewicz-Waltz, who went on to add: “The ‘central square’ will also soon be built according to a concept chosen in a competition and after consultations with the citizens of Warsaw.”

“Taking into consideration all the different scenarios that could pan out, we expect to be able to reveal the identity of the contractor this autumn at the latest. Only companies with extensive experience will be able to participate in the tender. We expect there to be a great deal of interest in this project and an intense battle over this contract. We are well prepared for that,” explains Joanna Mytkowska, the director of the Museum of Modern Art in Warsaw.

The project on pl. Defilad is to be the first of a series of large projects in this quarter of ​​the city. These are to be carried out so as not to coincide with the construction work on each of the others, and are to include: the western section of the complex designed by Thomas Phifer including the TR Warszawa theatre (a total of ​​15,000 sqm), technical and road infrastructure around the buildings, the underground car park, and the central square itself – the competition for the design of which has just entered its final stage.