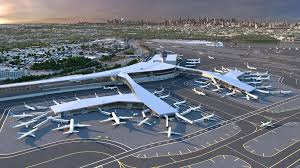 The Polish government is rapidly moving forward with plans for Poland’s new mega-airport. Proposed implementing legislation has been prepared and circulated for initial comments, an extensive concept document has been prepared, the office of the project’s plenipotentiary at the Ministry of Infrastructure has taken shape, an advisory council for the project has been appointed, and a tender is being prepared for selection of a consortium to design the project, with such selection to be concluded by the end of 2018.

The target date for initial operation is 2027.

The plan for CTH foresees initial passenger capacity for 45 million passengers annually, with the ability to expand to 100 million. CTH is to be a growth catalyst that will enhance connectivity and hub connectivity. It will serve to develop long-haul connections and intercontinental traffic. The accompanying investments in rail infrastructure aim to reduce travel times from Poland’s largest cities to CTH to 2-2.5 hours, and 15-20 minutes to central Warsaw. Planned road investments would involve up to 248 km of new or expanded roadways. The project will cover 3,000 hectares (30 sq km). Further, the new city would support up to 100,000 employees working at CTH and, ultimately, create a global metropolis from the agglomeration of Warsaw, Lodz and the new CTH city. The total estimated cost (up to 2027) is PLN 30.9-34.9 billion (€7.43-8.39 billion).

Draft legislation that would comprehensively regulate issues related to the implementation of this project has been made public. The draft covers these main issues:

A special purpose vehicle (SPV) called “Central Transport Hub LLC” would be created to ensure efficient implementation of the project, in particular, obtaining all administrative permits, acquisition of necessary properties and management, as well as procurement. Most importantly, the SPV is specified directly as the investor in CTH. The SPV would be 100% owned by the State Treasury, but it could establish subsidiaries, including joint ventures with private partners.

A plenipotentiary is named to implement CTH and oversee the SPV. Currently, such plenipotentiary, Mr. Mikolaj Wild, acts on the basis of a resolution of the Council of Ministers, but he would automatically become the plenipotentiary on the basis of this law when it takes effect. To ensure effective coordination of government agencies, he is also granted supervisory authority over “Polish Airports” State Enterprise (which operates Warsaw’s Chopin Airport and holds interests in 11 other Polish airports, as well as passenger, freight and aircraft handling services at Polish airports), the Polish Air Navigation Services Agency and the Civil Aviation Agency.

An implementation document will be prepared by the SPV as the basic document presenting the project plan, including environmental, financial and technical analyses, along with a planning proposal. The Council of Ministers will need to approve the plan and confirm it as a public purpose investment, which means that specific procedures for required administrative decisions may be carried out faster.

A reservation plan will be included, meaning that the Council of Ministers will designate areas on which specific principles of real estate management spatial planning will be applied. The SPV will have pre-emption rights related to the acquisition of land for investment and other special rights. This reservation will last up to 4 years. Already, local communities and residents have raised concerns associated with the de facto freezing of their real estate for this period (the affected locality, Baranow, would like to hold a non-binding referendum on this issue on 17thJune). The reservation plan will involve social consultations, which can also significantly extend the process.

A land development decision must be applied for by the SPV and issued by the voivodeship office. This decision will supersede any local spatial development plans. It will specify the boundary of the entire investment, requirements as to infrastructure and utility investments, the scope of the investment, environmental requirements, real estate subject to expropriation and real estate subject to rights of limited use. This decision will be a key milestone for the project to proceed. As a consequence of the decision, required land is automatically expropriated, with provisions for appropriate compensation. Based on the decision, building permits can be issued, either for the entire investment or for its stages.

The draft legislation establishes the SPV and the administrative structure in the government responsible for project implementation. But major issues remain. The government’s concept document presents these transparently, summarized in a SWOT analysis. Some major issues are:

CTH’s mission is to be a profitable innovative transportation hub. The concept document states that the financing plan still needs to be developed, and the draft law does not address the SPV’s financing. No single financial model applies to the air, rail and road components of the project.

As CTH is a hub, its spokes will be the high-speed rail connections, and LOT will no longer focus on serving Poland’s regional airports. Low-cost carriers will focus on point-to-point service from regional airports, and carriers based in hubs such as Frankfurt, Paris and Amsterdam will seek to do the same. LOT is seeking to handle 10 million passengers in 2018, but this is still quite short of the planned capacity of CTH.

If it succeeds, it will be transformative.