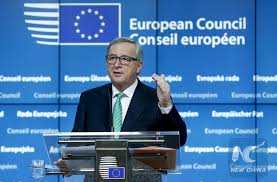 The European Fund for Strategic Investments (EFSI) has mobilised €335 billion in additional investment across the EU since July 2015. The Juncker Plan has made a clear impact on the EU economy and revolutionised the way innovation is financed in Europe.

The European Commission and the European Investment Bank (EIB) Group have delivered on their pledge to mobilise €315 billion in additional investment under the Investment Plan for Europe, the Juncker Plan. Backed by a budget guarantee from the European Union and own resources from the EIB Group, 898 operations have been approved, which are expected to trigger €335 billion in investment across the 28 EU Member States. This is more than the original goal of €315 billion set in 2015 when EFSI was launched, helping to close the investment gap left as a result of the financial and economic crisis. 700,000 small and medium-sized companies are set to benefit from improved access to finance. Given the EFSI’s success, the European Council and the European Parliament agreed last year to extend its duration and capacity to €500 billion by end-2020.

President Jean-Claude Juncker said: “The Juncker Plan has proven to be a success. We surpassed the original €315 billion investment target and the European Fund for Strategic Investments is set to create 1.4 million jobs and increase EU GDP by 1.3% by 2020. We have financed projects which without the EFSI would not have been possible, and all without creating new debt: two thirds of the investment comes from the private sector. From financing job-training for refugees in Finland to renewable energy in Greece to farming in Bulgaria – we will continue to use the EU budget for what it does best: to catalyse growth.”

Commission Vice-President Jyrki Katainen, responsible for Jobs, Growth, Investment and Competitiveness, said: “Today’s milestone proves the EU is a front runner in using private money for the public good. By adopting a market-driven approach and making strategic use of the EU budget, we have supported hundreds of innovative investment projects and helped thousands of small businesses to scale up. And as a result, we have improved Europe’s competitiveness and already supported at least 750,000 jobs across the EU. Thanks to the Investment Plan and to the efforts Member States have implemented in national structural reforms, the investment outlook in Europe is bright.”

European Investment Bank Group President Werner Hoyer said: “I like to call the EIB the good news institution, but even by our standards today’s achievement makes me especially proud. We did what many three years ago said was impossible. Triggering €315 billion in new, additional investment – most of it from the private sector – was never going to be an easy task. We demonstrated that it can be done thanks to the excellent cooperation between the EIB and the European Commission; the help and support of Council and European Parliament; and to the EU Bank’s experience, versatility, and dedication. The last three years have transformed the way Europe finances its priorities. We now have the key to making scarce public resources achieve more for Europe’s economy and for its citizens by crowding in private investment. Many people now consider the Juncker Plan model a winner and there is no going back from it.”

The EIB’s Economics Department and the Commission’s Joint Research Centre (JRC) estimate that EFSI operations have already supported more than 750,000 jobs with the figure set to rise to 1.4 million jobs by 2020 compared to the baseline scenario. In addition, calculations show that the Juncker Plan has already increased EU GDP by 0.6% and it is set to increase EU GDP by 1.3% by 2020. Two thirds of the €335 billion raised comes from private resources, meaning that the EFSI has also met its objective of mobilising private investment.

Measured against the size of the economy the biggest impact is in countries that were hard hit by the crisis, i.e. Cyprus, Greece, Ireland, Italy, Portugal, and Spain. While the direct investment impact is particularly high in those countries, the calculations found that cohesion regions (mostly Eastern European countries) are likely to benefit more from a long-term effect.

What has the Juncker Plan financed?

The Juncker Plan allows the EIB Group to finance operations that are riskier than its average investments. Often, EFSI-backed projects are highly innovative, undertaken by small companies without a credit history, or they pool smaller infrastructure needs by sector and geography. Supporting such projects required the EIB Group to develop new financing products, for example venture debt with equity features or investment platforms. Importantly, the Juncker Plan also enables the EIB to approve a greater number of projects than would be possible without the EU budget guarantee’s backing, as well as to reach out to new clients: three out of four receiving EFSI backing are new to the bank. This proves that the Juncker Plan has delivered real additionality.

Thanks to EFSI support, the EIB and its subsidiary for financing small businesses, the European Investment Fund (EIF), have invested in 898 operations and provided risk financing for 700,000 SMEs across a wide range of sectors and in all 28 EU countries. The top countries ranked by EFSI-triggered investment relative to GDP are Greece, Estonia, Lithuania, Bulgaria and Finland. Examples range from innovative healthcare solutions in Spain, to the circular economy in the Czech Republic, to food production in Greece. Factsheets by country and by sector provide a more detailed overview and further project examples.

How has the Juncker Plan benefited citizens and businesses?

In addition to financing innovative projects and new technologies, the Juncker Plan has supported other EU objectives, such as in digital, social and transport policy. Thanks to the EFSI:

15 million additional households can access high-speed broadband
More than 500,000 social and affordable housing units have been built or renovated
30 million Europeans benefit from improved healthcare services
95 million passengers per year are enjoying better rail and urban infrastructure
7.4 million households supplied with renewable energy
For a complete overview of the benefits, the European Investment Bank’s 2017 annual report on its operations inside the EU has more.

Another important goal of the Juncker Plan is to help projects get off the ground. The European Investment Advisory Hub provides technical assistance and advice for fledgeling projects. Since its launch in 2015, the Advisory Hub has managed more than 770 requests from project promoters in all EU countries. Over 50 Hub project leads have entered the EFSI pipeline. One of these was the development of a social housing project in the Polish city of Poznań. The project, which also received a €42 million EFSI-backed loan, will enable the construction and retrofitting of apartments for about 3,000 people.

The Investment Plan for Europe, the Juncker Plan, was launched in November 2014 to reverse the downward trend of low-levels of investment and put Europe on the path to economic recovery. Operations approved under the Juncker Plan’s European Fund for Strategic Investments are expected to trigger €335 billion in investments as of July 2018. Around 700,000 small and medium-sized businesses are expected to benefit from improved access to finance. On 12 December 2017, the European Parliament and Member States agreed on the Regulation to enhance the EFSI and extend the investment target to €500 billion by end 2020. The EFSI 2.0 Regulation entered into force on 30 December 2017.

The EIB, the Commission and the Advisory Hub continue to promote the use of Investment Platforms; investment facilities which pool smaller and/or higher-risk projects by geographic location or sector. This helps to better share risk, make it easier to attract private investors and eventually unlock financing for individual projects.As of June 2018, 41 investment platforms have been approved, which are expected to mobilise over €34.8 billion in investments.

The independent evaluation of the EFSI published in June 2018 concludes that the EU guarantee is an efficient way of increasing the volume of riskier operations by the EIB and it uses fewer budgetary resources compared to European grant programmes. It underlines that EIB support is key to promoters as it provides a “stamp of approval” to the market, thus helping to facilitate future fund-raising. It also highlights the need to continue improving access to finance for innovation, as well as to strengthen synergies with other EU funding programmes.

On 6 June, the Commission presented its proposal for the successor to the Juncker Plan for the next Multiannual Financial Framework: the InvestEU Programme.