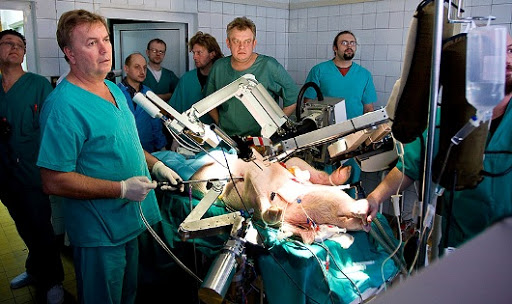 The Polish surgical robot could be several times cheaper than the world-famous Da Vinci robot. Although there are already working prototypes of the Robin Heart robot, it still hasn’t made its market debut. Meanwhile, more and more medical procedures can be performed by robots. Fully autonomous devices will be the future of medicine. Today, operations can be successfully carried out remotely.

The assumption was that Robin Heart was to be a Polish, many times cheaper alternative to the world-famous Da Vinci robot. Although the equipment was made in several versions, none of them finally went on sale. This does not mean, however, that Poles have stopped developing robotic solutions in the field of cardiac surgery.
Although Poles have not yet managed to implement a surgical robot, we have world-class knowledge and scientists. Project financing remains a problem.

“We supervise a part of the European project DIH-HERO: Robotics in Healthcare and we can see the comparison of Polish and foreign teams. There really is nothing to be ashamed of. Human capital and opportunities are there, but of course we have less financial opportunities. For many years to come, it will be difficult for us to enter the market and introduce a global brand. The money is still somewhere, but it does not go to those places where the effect of the creation of a Polish brand could be achieved”, points out Dr. Zbigniew Nawrat.

Automation of processes related to medical interventions is becoming a necessity – on the one hand, due to the possibility of eliminating risk factors, such as human error, and, on the other hand, due to the increasingly scarce human resources of hospitals. According to the Association of American Medical Colleges, by 2033 in the United States alone, there will be a staffing gap of up to about 140,000 doctors.