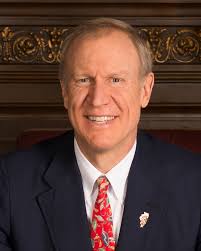 Gov. Bruce Rauner left Friday for a trip to Europe to meet with leaders in business, government, higher education and skilled worker training.

The purpose of the trip — financed largely by Intersect Illinois, a private economic development organization formed in 2015 — is to announce new projects that will “add significant investment and jobs to the Illinois economy,” according to a Friday news release. Rauner will visit Germany and Poland.

According to the release, there are currently 212 German companies operating in Illinois, employing more than 36,700 residents.

In Germany, Rauner will stop in Hannover, Frankfurt, Essen and Hamburg. His trip will also include a visit to Krakow, Poland, the city from which most Polish Illinoisans emigrated.

The governor is traveling with a delegation of state businesses and community leaders as well as economic and university development executives. Intersect Illinois CEO Mark Peterson said in the release that the business development organization is partnering with Rauner for the trip to “execute our foreign direct investment strategy.”

Greg Baise, CEO of the Illinois Manufacturers’ Association, called Illinois’ manufacturing industry the “backbone” of the state’s economy, adding that the way to revitalize Illinois’ budget is to create more middle-class jobs.