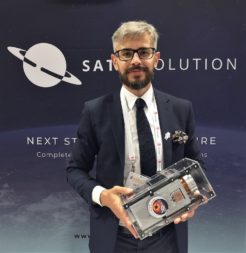 Polish space startup SatRevolution successfully deployed its first two nanosats, the Swiatowid and the KRAKsat, into orbit from the International Space Station July 3.

The company says the deployment, carried out by NanoRacks, marks the beginning of its initiative to place some 1,024 nanosats into orbit as part of its Real-time Earth-observation Constellation (REC) project.

Grzegorz Zwolinski, the president of SatRevolution’s management board, told SpaceNews that, under the project, the business aims to place 16 nanosats into orbit by 2022. This will be raised to 66 nanosats by 2023 and to 1,024 nanosats by 2026.

“Currently, we’re in talks with companies that specialize in satellite launches, including Virgin Orbit, a company with which we signed a letter of intent to cooperate in this field. Naturally, we’re taking any option that will enable us to place more than 1,000 satellites into orbit under consideration,” Zwolinski said. “Our objective is to create a satellite constellation that will allow us to map the Earth’s entire surface in close proximity to real time.”

The data procured from the constellation from the REC project will be provided to both private and public entities, which will be able to use them for civilian and military purposes, Zwolinski said.

“To date, the following entities have expressed interest in our project and their intent to cooperate with us: the United Nations Institute for Training and Research, the city of Wroclaw, the Polish Head Office of Geodesy and Cartography, and Virgin Orbit,” Zwolinski said.

As part of its expansion plans, SatRevolution recently opened an office in San Francisco and plans to hire 10 employees there by the end of this year.

“The U.S. is the largest market for satellites, both within the fields of technology and satellite data. Moreover, the presence of venture capital investment funds there is important, and we’re an investment project with a particularly high growth potential. The office in San Francisco will enable us not only with direct access to potential recipients of our offer … but it will also allow us to establish further business contacts,” Zwolinski said.

Other plans by SatRevolutioninclude launching a nanosat production facility in Poland. The project is estimated to be worth some 40 million zloty ($10.4 million).

“Construction work on the facility will begin in the coming years, and the exact starting date depends on the acquired sources of funding,” Zwolinski said.

To finance the development of new prototypes of the ScopeSat satellite and the DeploScope, a high-resolution cubesat telescope, the company plans to collect funds through a crowdfunding campaign that launched in May and concludes later this month. In the first phase of the project, SatRevolution aims to collect about 4.1 million zloty from investors.

Based in Wroclaw, Poland, SatRevolution was set up by Zwolinski, Damian Fijalkowski and Radoslaw Lapczynski who previously established T-Bull, one of Poland’s leading mobile game producers.