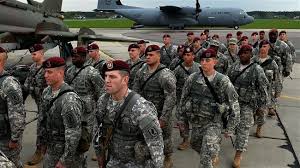 In a joint press conference Tuesday, Polish President Andrzej Duda announced he wanted the United States to have a permanent base in Poland, which would be named Fort Trump.

“I would like to invite you, Mr. President, to post more American troops in Poland,” President Duda said through a translator. “The presence of the United States is a guarantor of security in our part of Europe.”

“I am convinced this cooperation between Poland and the United States will go on smoothly,” Duda told the crowd gathered. “I was smiling when talking to Mr. President, I said that I’d very much like for us to set up a permanent American base in Poland, which we would call Fort Trump, and I firmly believe that this is possible”

“Such a decision lies both in the Polish interest as well as in the interest of the United States,” Duda added.

Duda also explained how Poland’s own military is undergoing improvements.

“We are implementing the largest military investment so far as the Polish armed forces are concerned over the past 30 years,” he added, touting Polish military growth in his remarks and their use of state-of-the-art Patriot missiles.

Earlier during the event, Trump said the U.S. makes “the greatest military equipment by far” and said it makes sense for wealthy nations to subsidize the costs of the U.S. security presence in the country.

Statements made by the two presidents come after Poland has been requesting an increased U.S. presence in Poland in light of increased Russian military activity.

Trump also alluded to negotiations for similar agreements with other countries, noting that they “get along with them very well.”

Later in the event, Trump and Duda took questions from the audience. The first question asked by journalists in the audience was in regards to a Russian plane shot down by Syrian forces, where 14 people were killed.

Trump said it was a sad situation but lauded the United States’ work in Syria.

“We have done a very job in Syria and in the region eradicating ISIS which is why we are there. And we’re very close to being finished with that job,” he said. “And then we’re going to make a determination as to what we are going to do. ”