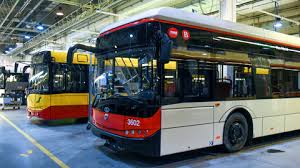 The investment by state-owned fund PFR is the latest transaction where the Polish state has bought holdings back from foreign investors, including banks, shipyard, and energy assets.

Poland’s government, which is run by the nationalist Law and Justice (PiS) party, says that the European Union’s largest former communist country is too dependant on foreign investors, who bought into Polish assets in the 1990s and 2000s.

The deal was announced by Construcciones y Auxiliar de Ferrocarriles SA (CAF), which finalised a July 3 deal to buy Solaris from Polish private owners on Tuesday in a transaction valuing Poland’s largest maker of electric buses at 300 million euros.

“With the participation of the Polish investment fund as a minority shareholder, CAF maintains the Polish roots of Solaris, while establishing an alliance with a strong financial partner to address the company’s ambitious growth plan,” CAF said.

Some critics say the Polish state now has too much say in the economy, and state-run companies with a number of political appointees are experiencing constant management changes that make running businesses difficult. (Reporting by Marcin Goclowski Editing by Alexander Smith)