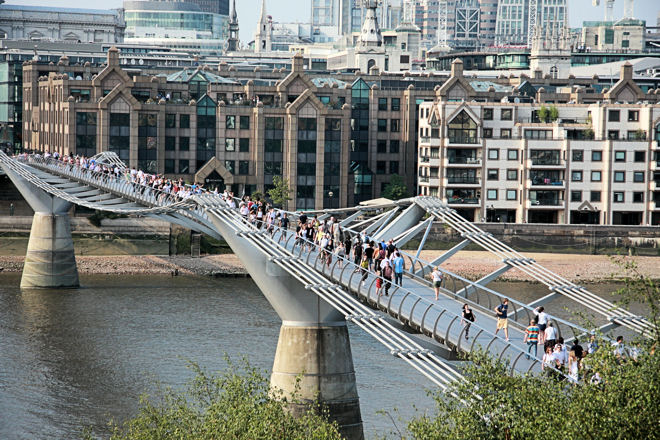 Longest pedestrian-bicycle bridge in the world to be built in Warsaw.

It will connect the Vistula boulevards with Prague and will be 452 meters long, i.e. over 100 meters more than the famous London Millennium Bridge. The authorities of Warsaw have just announced a tender for the construction of a pedestrian and bicycle bridge over the Vistula River.

The bridge will be a single-level bridge on seven reinforced concrete supports. On the left bank, in front of the last pillar, the crossing will widen and split into two ramps placed over the coastal promenade at the level of the Kościuszko Coast sidewalk. Two-flight stairs with a landing are planned between them, built into the terrace of the boulevard. Instead of corten, i.e. hard-rusting steel, the bridge will be made of steel covered with a paint imitating the color of corten. This material can withstand high riverside humidity better.

Thanks to the new crossing, Praga will move closer to the city center and gain a convenient connection with the university campus in Powiśle. And the line of Okrzei and Ząbkowska streets will become a new axis, the Prague version of the Royal Route – according to Warsaw Mayor Rafał Trzaskowski.

The entire investment is to cost nearly PLN 180 million. According to the work schedule, the bridge is to be made available to pedestrians and cyclists by spring 2024 at the latest.