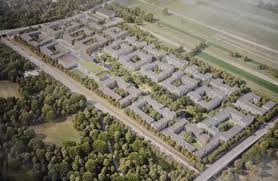 POLAND A consortium of the 22Architects and AMC studio – Andrzej M. Chołdzyński will develop the design documentation for the largest residential estate that will be developed as part of the Apartment Plus programme. The Nowe Jeziorki complex will be built on a 15-hectare plot on the border between Warsaw’s Ursynów and Lesznowola.

The urban and architectural concept assumes the construction of 2,700 apartments in 19 buildings and full social infrastructure – schools, kindergartens, sports fields as well as commercial and service facilities.
“We focus on the high quality of public space. We want to implement well-designed housing estates, which, just like Nowe Jeziorki, will be an aesthetic, functional and friendly place to live. We intend to implement these goals on a large scale – 2,700 apartments is the annual sale of the largest Polish developers, we plan to execute it within one residential estate,” comments Artur Soboń, the deputy minister of investment and development.
The concept of a model residential estate was selected in a competition in which two project teams were jointly awarded. The contract concluded between BGK Nieruchomości S.A. and designers concerns the development of comprehensive project documentation for a new residential estate, including development of a construction design and detailed design as well as the provision of author’s inspection over the construction of the project.
“The creation of urban and architectural spaces allowing for the development of local communities and their identities has been the dream of every pro-social architect since the Renaissance. We hope that participation in the programme implemented by BGK Nieruchomości will make it possible to carry out such socially useful work,” says architect Andrzej Chołdzyński.
“The Nowe Jeziorki project is a challenge primarily on the urban level, as 10,000 inhabitants are the scale of a small town, which should be provided with access to education, health care, trade and gastronomy, recreation areas and greenery as well as mass transport. The advantage of this location is the proximity of the railway station, thanks to which Nowe Jeziorki will be able to function in the form of estates created within the Vienna or Berlin conurbation,” adds Maciej Kowalczyk from the 22Architects studio.
Public consultations are underway, the effect of which will be guidelines for designing the common spaces of the residential estate. Conclusions will be announced on September 5th this year and the construction of the residential estate will start in spring 2019.