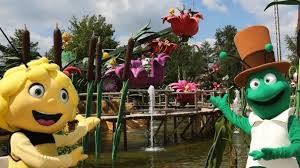 The Plopsa group unveiled its eagerly-awaited new venture in Poland on Saturday, September 29. Built at a cost of €20 million, Majaland Kownaty is the Belgian company’s first theme park in the country.

The indoor/outdoor offering was realised in partnership with Dutch investor Momentum Capital. VIPs from several countries were there to witness the opening event over the weekend, which concluded with a firework display. This included Gert Verhulst and Hans Bourlon, founders of Plopsa’s parent company Studio 100.

“We have been looking forward to this moment for a long time.”, said Plopsa CEO Steve Van den Kerkhof. “The result is wonderful, we are therefore extremely proud of what our investment and construction team has accomplished.

Designed by an in-house team lead by Piet de Koninck, Majaland Kownaty is highly themed. The content is similar to the existing Plopsa Indoor parks in Hasselt and Coevorden (Belgium/Netherlands), and also Majaland at Plopsaland De Panne by the Belgian coast. This summer, Plopsa also added an indoor offering to its German property, Holiday Park.

“The opening of Majaland Kownaty is a team performance,” said Martijn van Rheenen, CEO of Momentum Capital. In addition to his own company, he praised the efforts of the local authorities and community, the team in Poland and the great expertise of Plopsa and Studio 100. “Moreover, we are going to serve a market with the first real theme park in Poland,” he added.

The park takes its name from Studio 100 character Maja the Bee, already a popular intellectual property in Poland. As part of its 360° model, Plopsa hopes to use Majaland as a way to nurture this and other brands within the country. It also also expecting to pick up some visitors from Germany (Kownaty is located around 150km east of Berlin).

The new project is the first part of the wider Holiday Park Kownaty project. To expand Majaland’s outdoor footprint, a further €7.5m has already been committed to a wooden rollercoaster from Great Coasters International.