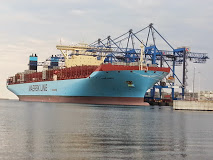 The largest container terminal in Poland and the Baltic – DCT Gdansk has marked the handling of 9 million TEU (20-foot equivalent unit) since opening. Achieving such a result within ten years of operational activity is a testimony to the continuous, dynamic development of the terminal. On this occasion, the Management Board of DCT Gdansk SA, with the honour of hosting the Minister of Investment and Development, Mr Jerzy Kwieciński, would like to thank all the clients, partners, contractors and authorities, without whom this success would not be possible.

The further development of DCT Gdansk container terminal is crucial not only for the region but also for the entire Polish economy and its entrepreneurs who are more and more visibly increasing the potential for international economic exchange.

“The DCT terminal that we see today, is the product of constant investment year after year to create a true gateway to the world for Poland. Foreign direct investment such as this requires a stable and clear regulatory framework over the long-term. I would like to thank the employees of DCT Gdansk for their hard work and also our customers for their support in developing DCT into a hub for world trade.”- says Cameron Thorpe, Chief Executive Officer of DCT Gdansk SA.

“Thanks to the construction of DCT Gdansk terminal ten years ago and continuous investments in its development, Poland can now effectively compete with the largest ports in Europe, to the benefit of the state budget. Handling 1,6M TEU in 2017, DCT has established itself as No 16 among top European terminals. Current growth dynamics, which quarter to quarter exceeds 40%, allow us to believe that this position will be at least maintained. It will have a direct influence on the increase in income to Polish budget due to customs, VAT and excise duty. In the first quarter of 2018 it was already 2.1 billion Polish zloty (EUR 470 million)” – adds Adam Żołnowski, Chief Financial Officer of DCT Gdansk.

Today DCT Gdansk has 1.3km of deep-water quay-line, eleven STS cranes, and handles over 460 vessels per year, including over 100 direct calls from Asia by the largest container vessels in the world.

DCT Gdansk enables Poland to be connected to the largest shipping trade-lane between Europe and Asia. A vital piece of direct foreign investment, ensuring that Polish goods can trade with China more efficiently, reducing cost, providing more competitive delivery times and a lower carbon footprint per container than alternative ports.

In 2017 DCT Gdansk handled almost 1.6m TEU, with direct calls by the largest ships afloat. DCT Gdansk is the only terminal in the Baltic Sea capable of handling ships of this size.

DCT does not just serve Poland but is also one of the most efficient ways to serve the Baltic Sea market via transhipment and also the most cost competitive way to serve the hinterland markets of the Czech Republic and Slovakia and elsewhere.

With a track-record of continuous development and expenditure in terminal infrastructure and modern handling equipment, DCT Gdansk is also actively involved in activities for the protection of the environment and the local community, recognizing in them the foundation of sustainable socio-economic development.