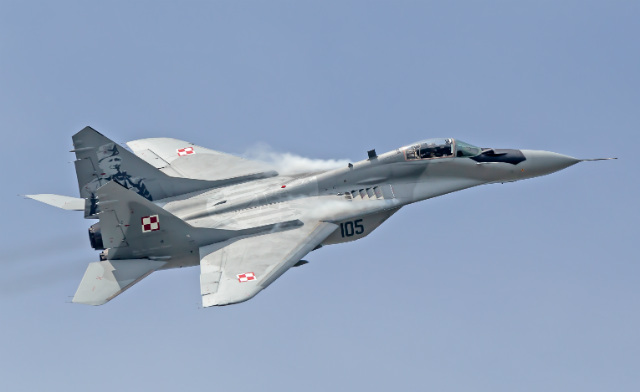 Boeing views its F-15 and F/A-18E/F Super Hornet as potential contenders, and Gene Cunningham, vice-president, global sales for its Defense, Space & Security unit, also believes there could be an opportunity for its electronic warfare-roled EA-18G Growler.

With Warsaw yet to define its requirements, Cunningham notes that Boeing’s production lines for the F-15 and Super Hornet will have the capability to deliver aircraft even if the tender process is protracted.

The Eurofighter consortium used to the show to promote its multirole Typhoon for the requirement, which seeks to replace Poland’s RAC MiG-29 fighters and Sukhoi Su-22 ground-attack aircraft.

“Eurofighter is offering newly manufactured aircraft, with the highest level of capabilities,” Nappi says. “There are different options for workshare for industry and the air force, depending on the Polish side’s requirement for support.”

Leonardo is also interested in offering its armed M-346FA to Warsaw, which is a current operator of its baseline advanced jet trainer. The developmental variant “can be an affordable solution for air-to-ground and air policing missions”, Nappi says.

Speaking ahead of the show, Ana Wugofski, Lockheed Martin’s vice-president international business development, said the company is waiting for Poland to issue a request for information for the Harpia programme. It could offer either the F-16 Block 70/72 or F-35, she says. The nation’s existing F-16C/D Block 52+ fighters could also potentially be upgraded to the latest F-16V standard, with the work performed in the USA, or in Poland with US technical assistance.

At MSPO, Lockheed international business development executive Joe Breen said the integration of the company’s AGM-158 JASSM cruise missile with the Polish air force’s F-16 fleet is now entering a second phase, introducing the extended range -ER variant. Production of missiles for the service will start in 2019, ahead of deliveries from 2021 and full operational capability being achieved the following year.

With the Harpia programme likely to advance on a government-to-government basis, Saab has not commented on the opportunity, but the Swedish company is expected to promote its Gripen E.