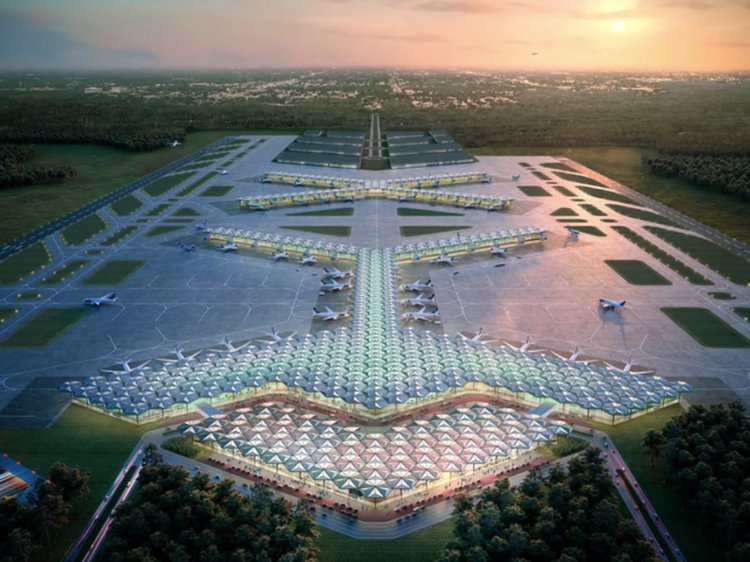 The Centralny Port Komunikacyjny (CPK), Poland’s new airport, is set to open in 2027.

Located between Warsaw and Łódź, the CPK will initially serve roughly 45 million passengers per year, with the view to eventually serve up to 100 million passengers, according to Polish government documents. This would place the new transport hub within some of the busiest airports in the world – Hartsfield-Jackson Atlanta International Airport was ranked as the biggest airport in the world in 2018, serving 107,394,029 passengers.

Though LOT Polish Airlines’ new hub will be inspired by some of the world’s best airports, including Singapore’s Jewel Changi, secretary of state at the Polish Ministry of Infrastructure Mikołaj Wild also told Business Insider in an interview that the design will ultimately be decided by an international competition between architectural firms.

So far, the company responsible for the CPK’s construction has received six architectural concept ideas for the new airport, which are to be an inspiration during the preparation of the master plan and further design works.

“We have invited a number of prominent architects, armed with a wealth of knowledge, professional experience, and creativity, to come and work with us and we’re glad we did,” said Dariusz Sawicki, the managing director involved with airport planning for the CPK. “The firms’ bold concepts have somewhat clashed with the investors’ expectations, and it’s turned out to be deeply inspiring — in some cases, it’s opened our eyes to unusual design solutions we hadn’t previously considered.”

Among those who entered the five design concepts are Chapman Taylor, Foster+Partners, Grimshaw, Zaha Hadid Architects, and Benoy.

The firm also proposed that an airport shuttle system would connect the two terminals.

The terminal itself would have a translucent structure, allowing sunlight to reach the inside of the building.

In addition, it would also incorporate a wooden finish and provide space to plant trees.
Grimshaw’s vision features an urban marketplace

Their vision includes a reasonably proportioned airport that veers away from the excessive size of some more recently built connecting airports, with a view to reducing the time transfers take, and to shorten the walking distance for travelers.