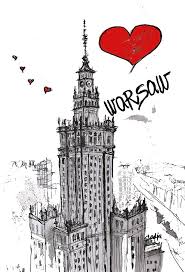 Warsaw, a city of Old World charm that was turned to rubble and ash by Nazi Germany, has been reborn twice since then.

The Polish capital first became an example of socialist city planning, rising in the postwar era as a drab and gray embodiment of oppressive Communist rule. But almost three decades of post-communist economic growth have produced a booming city of modern glass architecture, cutting-edge museums and revitalized historic buildings.

“Warsaw has become very vibrant and international,” said the 34-year-old, a public-relations specialist for a software startup. “You barely even have areas that are dangerous now.”“It’s a completely different city from what it was even 20 years ago,” said Joanna Kedzierska, a Warsaw resident who was 6 when communism fell in 1989 and who remembers Warsaw for many years after that as chaotic, dirty and crime-ridden in some neighborhoods.

Foreign money began to pour in after the fall of communism, producing skyscrapers, international hotels and shopping malls.

In recent years the city of more than 1.7 million people has received a second metro line, 400 kilometers of new bike paths and modern wastewater treatment and water purification systems.

The municipality now pumps clean drinking water into people’s homes for the first time in the city’s history.

While the palace and other communist structures are still there, they don’t dominate the cityscape as they once did. A luxury high-rise designed by Polish-American architect Daniel Libeskind is a new city icon, soaring almost as high as the Palace of Culture with a sail-like curved form. A Ferrari showroom housed in the Communist Party headquarters seems to mock the toppled ideology.Before and after photos of the city skyline reveal the dramatic scale of change, with a multitude of skyscrapers that have mushroomed up around the city’s iconic Palace of Culture, a massive Stalinist skyscraper erected in the 1950s to remind Poles that Moscow was their boss.

Dilapidated trams have been slowly phased out, with modern air-conditioned models running instead. Major museums have also opened: the Warsaw Uprising Museum (in 2004), the Copernicus Science Center (2010), and the POLIN Museum of the History of Polish Jews (2014). Historical treasures like the baroque Wilanow Palace have also undergone major conservation and restoration work, co-funded by the EU.

The booming economy is changing the human face of the city, too, attracting Poles from small towns as well as Ukrainians, Russians, Germans and even skilled workers from India. The unemployment rate is just 1.9 percent—far below the 6.3 percent nationwide, itself a historic low.The boomtown’s development is buoyed by the strong Polish economy, with national GDP growing more than sevenfold since 1990—a 28-year period that hasn’t had a single recession. The economy even picked up speed in the first quarter, growing 5.2 percent, as investors appear to brush off international concerns of a weakening democracy in Poland and Russia’s resurgence to the East.

Warsaw’s new wealth has fed a vibrant food scene with omnipresent vegan and sushi joints and even craft beers and high-quality ice cream. For the first time in Polish history there are now two restaurants with a Michelin star each, earned in 2013 and 2016.

But gentrification has also produced soaring real-estate prices, with the cost of apartments 26 percent higher today than even a year ago in Warsaw’s central district, according to Karolina Zubel, an economist with the Center for Social and Economic Research in Warsaw.

“Many people are forced to live in suburbs now because they can’t afford to live in the city center anymore,” Zubel said. Rents are also rising, meaning that housing “devours a huge part of a salary.” Even commercial rents are rising fast as large business centers relocate to Warsaw from cities like London and Paris, she said.

The new skyscrapers are also a source of complaint for some. Jan Spiewak, a city councilor and prominent activist, says they are destroying the natural wind flows, making the city hotter in summers, exacerbating congestion and pollution and destroying the city’s character.

He has been struggling to rally opposition against plans for a skyscraper that would require the destruction of a 19th-century parish house and churchyard, a rare green spot in the downtown area. He argues that the few buildings to survive the apocalyptic destruction of World War II should be preserved.

“This is a city that is under attack by developers and by political parties,” Spiewak said, blaming politicians for what he considers overly lax zoning laws. “They want to destroy Warsaw’s soul.”

Many residents are willing to accept such sacrifices to move into the future. Milczarczyk, the city spokesman, says the skyscrapers are needed to attract international capital.

“If investors don’t choose Warsaw they will go to Prague or Budapest or even to Slovakia,” Milczarczyk said. “So it’s better for us to show that we are the leader of Central Europe and that this is the place to put money, create companies and hire workers.”

Magdalena Barcik, who moved to Warsaw 20 years ago from the small town of Myszkow, measures the progress also in the greater citizen participation allowed in city decisions and in seemingly small changes—like people finally being allowed to sit on the lawns of the elegant Lazienki Park, once the grounds of a king.

“It sounds funny, but it shows that the city is for the people,” Barcik said. “In my opinion the biggest change is in something you could call the ‘human face of the city.’”